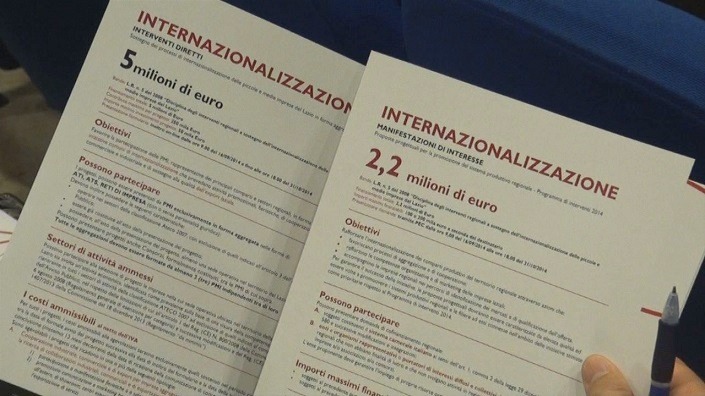 Thursday 4 September, at Room Tirreno of Lazio Region, the President Nicola Zingaretti, the president of the ICE Riccardo Mondi and the Regional Minister for Economic Development and Production Activities Guido Fabiani, have presented two new calls for proposals and other initiatives in support of internationalization process of small and medium enterprises in Lazio (7.6 million euro investment).

The purpose is to promote the process of internationalization of SMEs Lazio, Lazio strengthen the competitiveness of the world, to support the made in Italy, facilitating the exit of the recession by the system and make the Lazio one of the leading regions through investments totaling of around 10 million euro per year.

The first call for proposals proposed by 5 million euro, is designed to support the internationalization initiatives submitted directly by the companies of Lazio in aggregate form; the second with 2.2 million euro will affect instead the system of chambers and associations who want to do the promoting of processes of internationalization of the regional production system.

The calls will be disseminated and promoted through a calendar of events with experts “Sviluppo Lazio”, which will be available to small and medium enterprises. Zingaretti said: “It ‘s an extraordinary success, today the region was invaded by more than 950 entrepreneurs, who responded to the new calls for internationalization. Nowadays, with these calls, there are several million euro to help small and medium enterprises in Lazio to be the strongest in the world”.